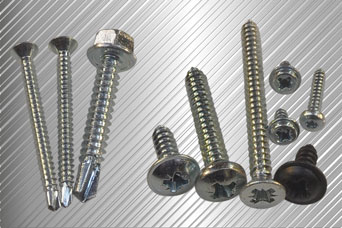 Self-drilling/self-tapping screws for metals and plastics – ex-stock from our team at Challenge Europe are often used in the construction industry, e.g. for fixing sheet metal in place on frameworks and can come with bonded washers to prevent water ingress in outdoor applications. Self-drilling screws come in a variety of formats but all are based upon the principle of drilling and tapping in one operation. They are generally used in steel, softer metals or plastics and there is a range specially designed for use in wood/composite materials.

Major benefits in using this type of fastening include increased speed of installation and efficiency provided by combining the drilling and tapping operations as well as a functional improvement in alignment, which otherwise could require re-setting the screw for correct fitment.

Self-tapping screws are stocked in depth as hardened and plated carbon steel and stainless steel self-tappers for use mainly in sheet steel products. These screws form or tap their own thread so saving time and providing a strong clamping action with the ability to remove and replace if required. Countersunk, Pan, and Flange heads are commonly available, the flange head having the advantage of spreading the load well and minimising deformation of the sheet thus eliminating the need for an under head washer. The traditional slotted drive is still available, but the modern preference is for cross recessed or multi-splined (star) drives to suit modern insertion equipment. Self-drilling and self-tapping screws are available in plated steel and stainless steel for engineering, construction and general assembly purposes.

Specialist Construction screws are often thought of as a separate genre but principally operate in the same way as their more standard cousins and tend to be designed to perform more specific functions. These functions range from having integrated sealing washers, for the fixing of cladding, through to Bugle head designs for use in fixing plasterboard. There are a variety of drives available, often linked to the intended function of the fixing, and can include designs such as Hex, Star, Pozi, Phillips and even Square. Some fixings are available in a Collated format where speed and handling is important.

Largely because of their wide utility this group of self-drilling/self-tapping screws offer an extensive range of different head and drive types. Head types include the following and may often be specified with a drive configuration of choice:

Also wafer head – which is very thin – for use where a low profile is required.

In some instances they can also be offered with anti-vandal features, such as pin hexagon, pin star (multi-splined) and clutch head – contact us for more information. 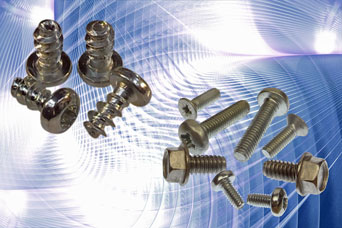 We are delighted to hold in stock both metal thread-forming screws, e.g. for castings etc where they secure components by forming a machine thread – also purpose designed screws for thread forming in plastics.

The team point out that thread forming tri-lobular screws are used for fixing into metal components – a form of self-tapping screw, they use the tougher tri-lobular design which assists the grain flow as it effectively deforms a thread into thicker material than could be managed with a standard self-tapping screw. This process results in a thread geometry that is more accurate than a standard self-tapper and so provides a stronger fixing which is more resistant to loosening under vibration. Almost a machine screw in concept these thread forming screws leave a tapped hole when removed and may be replaced with a standard rolled thread machine screw if required – for example at servicing or repair and thereby provide a much higher torque loading capacity than a standard self-tapping thread. They are typically used in steel, aluminium, aluminium die castings, zinc die castings, magnesium and other light alloys.

Heads and drives include countersunk, pan, and hexagonal/flange types with cross recess, multi-splined (star) or hexagonal formats. Hardened steel is normal for most applications and is suitable for use in a variety of metals providing the correct diameter pilot holes are in situ. Stainless steel thread forming screws are also freely available but tend to be used in softer materials such as aluminium and zinc.

Thread forming screws for plastics have become more and more important in the assembly of everything from electronic equipment to furniture, as they are easily inserted into drilled or moulded holes in thermoplastic materials where they deform the material to provide optimum fastening force superior to standard self-tappers. Thread forming screws are especially useful in the manufacturing production environment where an automatic feed can be employed to greatly speed the assembly process, by eliminating the need for nuts or inserts, so reducing piece part costs, labour costs and process costs.

There are a range of thread geometries associated with this type of screw, this is to allow for their use with different component materials and design features. For example, if required for insertion into thinner walled, harder plastic mouldings it might be advisable to try a tri-lobular thread variant which tends to reduce the risk of burst out. Of course, the choice of hole diameter can be critical and the team at Challenge can advise on both screw selection and suitable hole diameters.

Head formats for use with plastics include countersunk, pan, and flange types with cross recess or multi-splined (star) drives. Typical materials include hardened steel with a zinc & clear passivate finish or in some instances black finishes can be available, also stainless steel. Again, proper installation requires a pre-formed hole of the right diameter to properly form or cut the right size thread and to take advantage of the benefits of this design which include low radial stress, no material to jam the thread, maximum resistance to substrate relaxation and no material stress through plastification.

See here for self drilling screws. 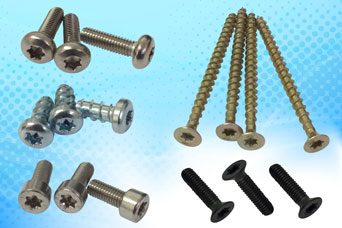 Our team are pleased to offer ex-stock Hexalobular Internal Drive screws (generically of the TORX style) as part of our manufacturing supply service for delivery under normal production protocols, e.g. Lineside supply, JIT, Kanban or similar.

Often referred to as star drive or multi-splined screws, they are available in metric standard sizes and are designed for automation assembly in that they feature a positive drive with reduced slip-out and are especially suitable for controlled torque insertion – using bowl feed equipment.

Hexalobular Internal Drive screws are popular for use in the auto, motorcycle and bicycle industries, as well as instrumentation, electronics, computers, brown goods and construction projects.

A wide range of screw types in steel and stainless steel are now available with this type of recess to ISO 10664.

Security or tamper-resistant variants are available with centre pin requiring a special driver – also external Multi-splined bolt heads are available providing many of the benefits associated with the aforementioned internal drive version.